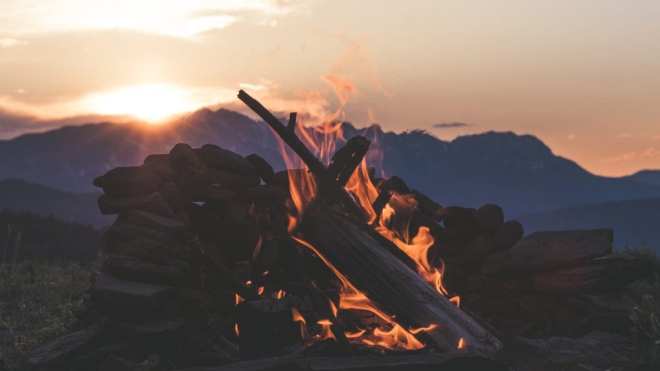 Bronherrn and his people claimed another victory against the Zuthans. Instead of vanishing once she aided them, Aethelwyn remained, but her head drooped and the glow of her skin dulled. She looked almost human.

Bronherrn scanned the landscape and held her steady. Her cloak fell open and he wrapped it around her. The once lush field lay smeared with blood and broken bodies. The bird song of spring held no transformation. Clumps of grass were torn all around. What few wildflowers dared to grow on the battlefield sat twisted, puny and ripped. The only wildlife that remained were scavenger birds that swooped down to feast on the dead before they were burned.

Bronherrn refused to eat with the other warriors. He pulled Aethelwyn onto his lap and laid his chin on her head.

“Do you need anything of me, Aethelwyn?” His father eyed them.

“I am not well,” Aethelwyn answered faintly.

“She only needs some rest,” Bronherrn said.

Wynell blinked at them from a clump of grass she sat on with Danarrus. “It is not her fight.”

“She is the reason we still live.” Bronherrn glared back.

“How are we to win this war if her powers are not fit for battle?”

Bronherrn clenched his teeth ready to shout at Wynell, but Danarrus’s father Tommerald broke in before he lost control. “Wynell, your questions are warranted, but they are unnecessary.”

He glanced at Bronherrn with ease. “What is our next move?” Danarrus looked between his father and Bronherrn.

Tommerald exchanged a knowing look with Bronherrn’s father. “We defend our land.”

“For how long?” Wynell leaned in.

“But how much longer can this continue? The Zuthans keep coming and Aethelwyn is−”

“You have no right to question me, girl,” Bronherrn’s father snapped at her. “You should not even be here. I allow you to stay on behalf of my son and his friend.”

“Forget my son and his girl.” Tommerald sat proud. “We were once just as foolish.”

Bronherrn’s father grunted his agreement and scowled at Wynell. “As you rest, the greatest of us come together to devise our strategy. Do not question our methods. We will prevail.”

“Does the hidden pass not protect our people?” she asked.

“Aye it does,” Tommerald answered before anyone could reprimand her. “But let me remind you why we continue to defend this ground, despite the fact that the Zuthans have yet to discover the way to our village.”

The sharp light in Tommerald’s eyes captured Bronherrn and he nudged Aethelwyn to be strong.

Tommerald stood tall, shoulders back. “We’ve all heard of the ancient peoples who came before our time. Those few who survived are said to have birthed the life that we know now. But have you ever heard the tale of, Rennerce; the man responsible for the fall of his people?”

“I thought not.” Tommerald chuckled. “It is a lesser known story. Very unpopular with those who boast of glory.”

Tommerald lowered his eyelids and set his jaw. “Back when the lands were in constant peril, wars were fought from all sides. The ground itself shook as if angry. It was a harsh time. Nothing like what we have come to know today. The people lived in fear.

“Rennerce emerged from a simple farming family after being raised to honor the land and protect his people. His sword skills and sharp instincts brought him much glory when he earned the right to fight. Every battle gave him more knowledge and he quickly rose in the ranks. The first body of men he commanded tasted victory and basked in their power. Rennerce was favored and gained the full trust of his people. When his commands brought peace and ended the attacks, he was crowned ruler of the mountains.

“For years, he grew comfortable in the security of his reputation. Little did the aging man realize, with each generation new ambitions arise to conquer those in power. The children and grandchildren of his former foes worked to claim each piece of land that Rennerce had secured as his people forgot their past struggles. By the time he was an old man, his warriors had scarcely tasted any blood in all the years of peace.

“When war once again threatened, they had no defenses. He thought up a plan to avoid battle. He oversaw an excavation into the heart of the mountains, and meant to dig an underground city where they could hide. The act was carried out before his kingdom fell. It was taken quickly. He alone remained to fight despite his frail frame. The great ruler perished while those he fought for fled into the depths of the mountain.

“With no one in the way, the conquerors searched for survivors to slaughter or enslave. Rennerce’s people gained safety inside his hidden city. They carved out the walls with exquisite artistry to keep themselves entertained. For weeks, they found comfort in the roots and fungus that nourished them. Tunnels were crafted with expert skill surrounding an underground spring.

“They had everything they could need for a time. But it was not meant to last. They took advantage of the haven, abused the memory of their former leader. Instead of devising a plan to attack or travel distant lands in search of a new home, they remained underground, fearing the dangers that awaited them beyond.

“Then one night, the dust beneath their feet began to dance and the very lands that protected them convulsed to such violent proportions, the walls caved in and buried them alive. Every crevice, every carving lay buried with the destruction of the Gods. Some think it may have been the very spirit of Rennerce trying to remind his people where they came from.”

The hairs on Bronherrn’s arms stood up. Night had fallen and the stars glistened in Tommerald’s dark eyes. He stopped directly in front of Wynell.

“Safety is a myth. This,” he said holding up his weapon, “is the only security. Remember that when you return home and lay happily on your furs at night.”

The effect of the Tommerald’s words left a hush in their wake. He walked over to his son, patted him on the shoulder, and moved on to speak with some others scattered about the vast field. Bronherrn looked to his father who met his eyes with a strange understanding.

Bronherrn nodded and brushed his fingers through Aethelwyn’s hair. Unsure if she lay asleep against his chest or just rested her eyes, he tightened his grip on her. She never seemed so fragile.

Wynell glanced over at them. “Do any of you believe that old tale?”

Aethelwyn raised her head and took a deep breath. Her perfect features contrasted with the rustic scenery of the people around her. “Yes, Wynell. Your people shun such disheartening tales of discouragement, but those of us in The Otherworld cherish lessons learned from the mistakes of others.”

Wynell pursed her lips. “But he seemed to be making it up. Rennerce this, and Rennerce that. I think he was only trying to shut us up.”

“He was trying to silence one of us,” Bronherrn said.

Danarrus shook his head. He grasped Wynell’s hand, stood, and led her away.

As soon as they were out of hearing distance, Bronherrn ran his fingertips over Aethelwy’s hand.

“Do not fear for me.” She pulled back. “It is as you said. Most of my strength has already returned.” She stood as if she had not spent the past hour allowing him to comfort her.

He ached to draw her near, but the moment he followed, she stepped back.

A soft light rose from her cheeks and moved in to brush her hand over his cheek. “You know the dangers of my doings. I have no choice.”

He tilted his head toward the sky and focused on the bright ring encircling the moon. When he looked back, the priestess was gone.