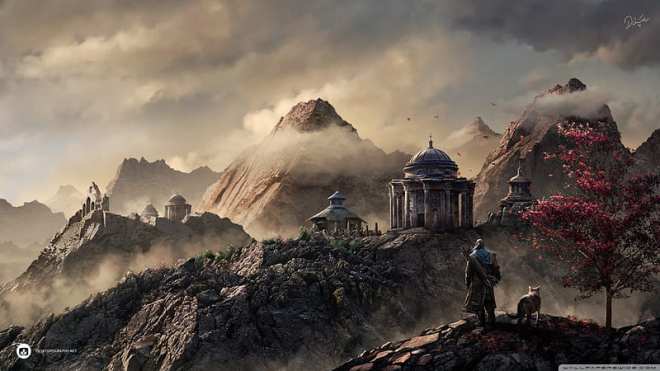 Posted on November 5, 2021October 11, 2021 by JessicaMarieBaumgartner Posted in adventure, art

The slick snows slowed Prillani. She was barely used to the strange mountains, but Bronherrn led her carefully. He reveled in the freedom of having his wife to himself again. When they reached the top of the chasm ledge, Prillani stopped before the stairway.

“When we last came, I felt so connected, so happy with our…friends.” Her lips quivered.

She closed her eyes and lowered her face.

“Prillani,” he brushed his hand along her cheek and down her chin to pull her face up. “You need not concern yourself.”

“There is something you must know.”

He cocked his head wondering why she held so much guilt.

“Offered you?” Bronherrn flared his nostrils at the idea. “And you declined?” he asked with a burning heart.

Prillani scowled. “The thought of accepting has crossed my mind. He is a priest and I a woman, no different than you pairing with Aethelwyn.”

“But I have not been with her since our marriage.” Bronherrn heard his voice growing.

“Our spiritual energies are linked, Aethelwyn told me. You cannot deny it.”

Bronherrn starred at his wife. “After how you guilted me. How you fought me when I did nothing wrong? Now, you consider this?”

Prillani reached for his hand and kissed his fingers. “My love for you is greater than my desires, but I am tired of fearing your obsession with Aethelwyn. If I were to share you with her, I may find comfort if she shared with me.”

The warrior looked down upon the warm Otherworld and thought of his friends. “This is too much.”

“I understand.” She looked upon the staircase. Bronherrn tugged her forward gripping her hand tight. He had fantasized about reuniting with Aethelwyn many times when sitting up alone at night, but the thought of allowing anyone else to touch his wife made him want to kill every man he saw.

They entered the sacred space, and were surrounded by the inhabitants’ chant of greeting. Bronherrn contemplated leaving. His anger was boiling too hot.

Aethelwyn slipped through and smiled at him under thick eyelashes. He lifted his deep tones and mix his voice with hers. Somehow the harmony eased his ire.

Prillani sang along still clutching his hand and his thoughts overlapped. Images of battling for his wife warped into strong visions of taking command of Aethelwyn and sharing her with his wife and Hefeydd.

They sang together, voices pulsing with the drums. Prillani gazed on him as Hefeydd drew close. Bronherrn struggled to keep from glaring at the priest. Aethelwyn had often been a comfort to him. She had binded her life to Hefeydd’s and he never once begrudged Bronherrn time alone with her, but he hated the idea of sharing Prillani.

His frustration serged with arousal. He danced stiff, keeping his mouth shut tight. He continued to sing until the music died down, as if that would keep anyone from making any decisions that would set him off.

“You have too much fight in you today.” Aethelwyn stopped and rubbed his shoulder but he stepped back. “You are among friends.” She gaped at him.

“Why did you not include me in the conversation of sharing Hefeydd with my wife?”

Aethelwyn’s eyes darkened to a deep royal purple. “You have seen death, torture, and persecution, and this is your concern?”

“That is not an answer.”

“Come.” She led away from his wife and Hefeydd. They sat before the calming fires. As much as he wished to argue or refuse, he knew he could not offend those who had taken him in when he was near death. A feast of fruits and cheese were set before them and a priest brought over some mead. Bronherrn’s mouth watered, but he refused to have any of it.

“No one intends to rob you of your wife,” Aethelwyn said.

“Then I should have been included in the discussion.”

The glow of her skin dimmed as she lowered her eyelids to slits. “You are angry that you cannot control her?”

Bronherrn let out a puff of air and bunched up his face. Xanthu moseyed out from the shadows to rest her large feline head on his lap. Her calm purr soothed him and he patted her head. “Many things have come to pass.”

“And there is only so much you have control over. I understand. I am sorry if we offended you. But Prillani is a loyal woman. She would never consent without your approval.”

Bronherrn sighed and took up the mug of mead. Nodding he sipped. “I do not wish to control her, as you say. But this is different, she is my wife.”

Aethelwyn sent him a knowing smile. She waited, so he divulged all that had passed. The losses, the aftermath. It pained him to speak of it, but the release of the tale offered some peace. A familiarity warmed him. “I fear that my brother has been lost to me despite the fact that he is still alive.”

“Perhaps your brothers should venture here.”

“No.” He shook his head. “Grimhelden does not wish to follow any of our practices.”

“You think I have not tried to persuade Grimhelden?”

“You do not know much of brothers.”

“There is a rivalry. We do not speak of it, but we each make our own way.”

“That sounds absurd.” She stared at him once more.

Bronherrn nearly forgot what he was saying. He lost himself in the curve of her perfect lips. “I may convince Druthleer someday, but he is more like our father. He does not feel the need. Grimhelden thinks himself an outcast despite my best efforts to include him.”

Aethelwyn rubbed his shoulder. “You have suffered greatly.”

“Not as much as Grimhelden. He lost Wynell, our father, and now Pherlis.”

“He was in love with Wynell?” She wrinkled her nose.

Bronherrn laughed. He nodded. “He grew almost as infatuated as I was with you.”

“So much has happened.” He grasped her hand, then glanced back to find his wife dancing with Hefeydd.

Hefeydd gestured at her and winked at Bronherrn. His comical expression offered no ill intentions.

“Come.” Aethelwyn stood and gestured at Hefeydd. He led Prillani to them and they walked to Aethelywn’s hut. She stood waiting for everyone to enter before ducking inside. Even having attached herself to Hefeydd, she held her air of command.

The heat of the fire offered a cleansing air. Hefeydd turned to Bronherrn. “Aethelwyn has confided her hand in the past war to me. You have all fought so bravely. I envy you.”

“Is this truly wat you wish?”

Prillani rubbed his beard and kissed him. “I wholly embrace it. Though I am a bit scared.” Her lips trembled.

He breathed deep. “I will be with you no matter what.

“We would never let either of you come to any harm here,” Aethelwyn whispered to them.

“The fire is young.” Hefeydd let his cloak drop. “Let us enjoy the light of its warmth.