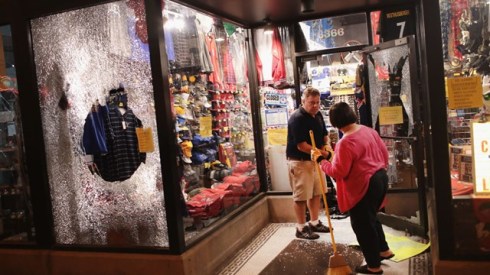 I posted this here back in August when the closure was announced but removed it when a large publication showed interest. They have passed (for their own political reasons) but I’m not leaving this alone.

St. Louis is disintegrating. It’s the new Detroit. I watched my mother’s factory position at Chrysler get outsourced, my neighbors destroy themselves after Michael Brown’s death, and now the politically charged responses to COVID-19 and “Defund the Police” movements seal its fate.

I’ve always loved my home town. It’s always been magical to me. A place where 3 rivers meet is considered powerful in ancient folklore.

I love the parks, the people, and the public places. Thin crust pizza is the best. Toasted ravs are amazing, and gooey butter cake is mouthwatering. The Fudge Shop at Union Station had the best sweets. South City and Tower Grove Park have hosted some of the best creative minds. The loop continues to inspire writers, musicians, and artists even after being looted and busted up during numerous nights of unrest over the course of the past decade.

Forest Park holds many memories for my children and me. The Science Center, the museums, and The Zoo are landmarks that everyone can appreciate. There is nothing like it, but I have to accept the facts.

I’ve walked over broken glass leftover from riots, past by boarded up shops. I’ve been served by waiters at restaurants who are afraid to walk to their car at night because they suffer from PTSD after being attacked for working during “unrest.” The pandemic has not aided anyone in finding any solutions.

Fear is being injected into our brains faster than any meds. Division over the effectiveness of masks, the color of our skin, and the future of education has pushed St. Louis into a worse state.

When I was younger I tried to get out. I thought I would “make it” in a bigger city and really become someone. It took a while to comprehend that anyone can “make it” anywhere. Home was always waiting. It called to me. Drew me back. When I settled down to raise a family I accepted that I could never truly leave St. Louis.

Then I got divorced, my life became as tumultuous as the destruction of the city. I had to find a new balance. When I did, I got remarried and moved “across the river” to St. Peters.

I felt like a traitor. I had left the land I loved to raise my kids in the unknown. My only comfort was that St. Louis was just a drive away. We have frequented it often in the past few years, but everything’s changed.

The roads continue to crumble as if displaying the hidden cracks and creases lying underneath the foundation. Violence is rising at an alarming rate. The mayor and city prosecutor turn a blind eye, then demand answers from state and federal officials who have bigger things to handle than a city intent on burying itself. Community programs are losing support and funding.

All of this I can shrug off. Cities have periods of struggle and prosperity, just like people. St. Louis is resilient. I have defended it for ages, until now.

Often times the symbolic deaths are the ones that hit closer to home. I still can’t get over the fact that the St. Louis zoo is closing its children’s zoo after 50 years of operation. At first I imagined it was a precaution due to coronavirus concerns. In doing further research, I found that it is to be permanently closed and possibly replaced with a dinosaur exhibit in the future.

I don’t know why this hurts so bad. I sat up all night when angry mobs set fire to buildings within a mile of my house after Michael Brown’s death. I’ve cried with strangers, hugged friends. Even during those times I knew we would get through it together.

Places like the children’s zoo were a beacon of hope no matter how rough things got. They have been a staple in so many lives. People come from all around, all walks of life, to enjoy hands-on learning experiences, and soon this one will be gone.

For some reason that signifies the end. The real end.

When we take away the most universal teaching tools and replace them with relics of the past, it’s over. People die, erosion tests structures, but the lessons we pass on to others are all we really have as a culture.

Knowledge and wisdom seem to be lacking in every corner of St. Louis. Logic and reasoning have been replaced with sound bites and social media one-liners to cover up incompetence. My life has improved since I left. Realizing that makes it all the harder. I want to see the city succeed, but right now it needs to be resuscitated.