I’m a nature-loving-tree-hugging-rainbow-person. I also like to do research and study biology. The science behind the world is still undefined to humans because we want everything laid out in perfectly certain terms and that’s just not possible in an ever-changing expansive world.

There is plenty of evidence of humanity’s impact on the world, but then again there is also plenty of evidence that clearly shows the planet’s resilience and capability to show us who’s boss if needs be. When it comes to political divides and movements of people who scream at each other and do nothing more than waste oxygen, I turn away from society and step back where I feel most at home: in the forests, near lakes and rivers walking between trees and plants that cover the land in an abyss of greenery.

From my place in the world it is difficult to understand those who take more than they need, corporations that produce endless waste, and governments that overlook serious issues that will be felt whether lawmakers act of not.

It is also confusing and disorienting to research the facts and find continuous evidence of eco-terrorism, individuals and organizations connected to sensationalist movements that would rather light a fire to utilize smoke signals for their benefit than to preserve what is designed to survive natural disasters over time.

What am I talking about?

I am talking about the nearly 200 different people being charged with arson in Australia. Here we are worrying over the wildfire crises and come to find that some are not only fanning the flames but lighting them. 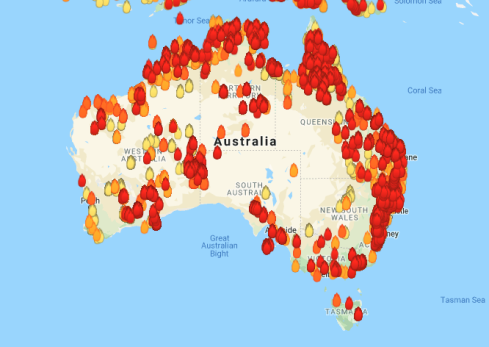 Why would anyone do that?

Depending on psychological and political mindsets some may do so in the hopes that it will put enough sulfur in the air to bring heavy rains. Actually lighting a fire to stop the fires sounds ludicrous but in times of desperation it may seem the only thing left to do. On the other side, eco-fascism is not dead. Eco-terrorists have been caught setting blazes to warn everyone about the dangers of climate change, force people from their homes in areas where businesses wish to develop complexes, or just for the sheer joy of it.

Some people hate humanity so much they will destroy everything, even the environment the so love, in order to harm us.

It reminds me of the people linked to lighting fires in the Amazon and along American coasts. We don’t hear about that in nearly as many headlines as the ones stating that the world is ending and we’re all going to die.

How is anyone supposed to support the cause to protect the earth from “Climate Change” and human interference when so many stories presented as proof of man-made global catastrophes are they themselves man-made?

Every day I witness the media taking advantage of poor research and bad narration.

Every hour I scroll through posts of people panicking and spreading self-hatred for what “we have done to the planet.”

The best way to destroy a people is to convince them to hate themselves and everything about them.

Every second I breath clean air and thank my gods for giving me the ability to dream for the future and approach the present with a level head as I escape to the woods and encounter wild animals who look on me as if to say, “Don’t worry, people are always acting crazy. Always have, always will.”

I don’t claim to be a brilliant scholar, or even nearly as informed as I wish to be, but I do search through various sources from all sides of an issue, and from what I’ve found, society should be more afraid of manipulative news outlets, politicians, and “charities” that skim more off of donations than helping the causes they serve.

Be careful who you donate to when pouring guilt money into the Australia bushfire funds. Much of what was donated to Haiti after its massive earthquake and New Orleans after hurricane Katrina never made it to those in need. Think about that.

It has become fashionable to hate humanity. To loath ourselves and our way of life. To allow ourselves to be taken advantage of through guilt.

How sickening that is.

The easy route is what we should despise. Not ourselves, not humanity, or existence.

Instead of screaming about causes, live them. Make every dollar you spend count. Every step you take a conscious one.

Get away from misleading screens. Use less energy.

Plant something. Look to the sky. Pay attention to what is in front of you instead of what others want you to see.

Fires always burn, but they die as well.

No matter what gets funding, likes, and shares, we cannot save the world by burning it ourselves. Tears hold more water than angry tongues and sweat nourishes the land.

Don’t believe me, read up on just a few of the sources I found interesting:

2 thoughts on “We Cannot Save the World by Burning It”