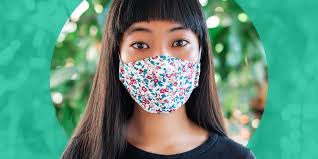 From infancy, facial recognition is one of the key factors in our brain development. Expressions and reactions teach babies their first lessons about the world around them. In early childhood they help young minds empathize, relate, and build social skills. Masking individuals in later life leads to mistrust and gaps in communication, making it harder for us to work together.

Why does this matter?

Look around. Go to any store. Whether you’re in a fully open red state, or a complete lockdown blue state, many individuals are choosing to mask themselves. It makes many of us feel safer. It’s a way to “show we care.”

Now, I am always one to let people do as they wish. But when it affects my children, I do my research and based on what I’ve found, the future isn’t looking so healthy.

The “science” of non-surgical masks is akin to security blankets. They help prevent panic and irrational behavior due to fear of the unknown, which is a good thing. If wearing a mask makes someone less likely to go crazy and kill someone else because they might carry a virus, then it can be helpful.

Unfortunately, the psychology of masking our faces makes the mental health crisis of yesterday look like a walk in the park. If depression, and anxiety were on the rise before the 2020 pandemic, get ready for even worse epidemics.

Babies whose parents mask their expressions will be socially deficient. Within the first 3 years of life a person’s brain connects billions of neurons. This is the main period where our view of the world is formed.

I gave birth to my youngest child in the fall of 2020. The world he was born into is not the same as the one his siblings entered, but I refuse to mask myself from him in any setting because I know that his brain will be less likely to connect patterns that encourage empathy and understanding if I do so. My husband and I do not allow masked individuals to closely interact with our children for this very reason.

“Covid cases are on the rise” we’re told, but deaths and serious reactions did not spike like previously predicted. The average age of death from covid is 80, the average life expectancy is 78. Less than 1% of the population has been claimed by this virus and still schools, daycares, and youth activities are encouraged by our government to require masks or shut down entirely.

Some will say the virus didn’t wreak havoc because of lockdowns and restrictions, but areas that locked down have higher death rates than those that did not. Blue states mostly supported strict measures, while the majority of red states refused to lock down or impose mask mandates yet blue states had 40% more deaths than red ones: https://www.aei.org/economics/impact-of-the-coronavirus-pandemic-on-red-blue-and-swing-states

My older children play with their grandparents and friends, but they are no longer enrolled in sports or art programs because of mask requirements. Instead we’re working on connecting more with the families in our community and giving everyone who wishes to interact the socialization and normalcy they need to properly thrive.

We know that masking faces throughout development increases the likelihood of our children developing: borderline personality disorder, paranoid schizophrenia, and severe autism.

Bacterial infections, lung problems, blood-oxygen levels, and dental health are all hindered by continuous mask wearing. The argument that we should all wear masks to “stop the spread” because doctors wear a mask during surgery is invalid for the average person being that doctors remove that mask the second they are done and schedule breaks in between surgeries. Also those masks are immediately disposed of. Fresh ones are used for each procedure.

Having entire populations of people wear disposable masks for months on end has done little to prevent cases BUT it has added to pollution, so there’s that.

Wearing a mask to go out for a few weeks and “flatten the curve” is so last year. Maybe 2021 can help us realize that there is more to our health than adhering to scientifically unsupported mandates, and remind our leaders that if they cannot adhere to their own mandates, the population and its children won’t either.