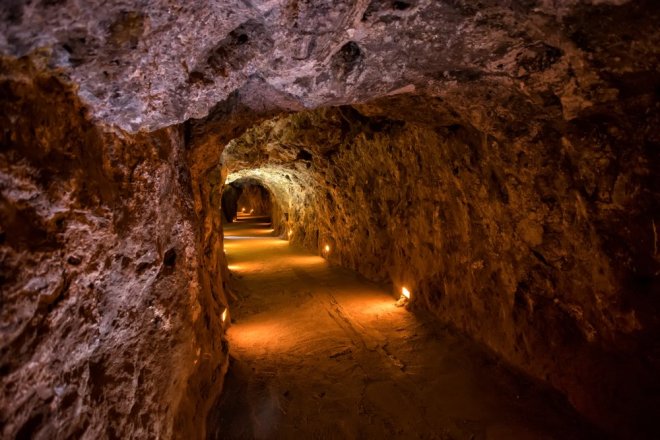 When Bronherrn walked into the town, he was unsure where to go. The loud mingling of many voices called him to the central grounds where he found a cluster of men standing before nearby huts. He watched a group milling about and went to join them.

“I came from Bainsberth,” a stout scruffy man said to him. “How far did you come?”

Bronherrn grew suspicious of the friendly nature of his companion. “Legs back, in the mountains.”

“The mountains, what’s a Ultainian doing coming to work in the Ferillian mines?”

“The Ferillian mines?” Bronherrn laughed. “What luck. I need a place to stay for a while and the hospitality of the Ferillians is told of everywhere. I am Bronherrn, glad to meet you.”

“My name’s Vermeesh. A lot of us are from distant lands. My town is so small I doubt you have knowledge of its existence.”

Bronherrn looked around to find he blended in well. Many of the other men were dirty with travel and carried bags or a few weapons. His lack of clothing proved of no consequence. It better displayed his able body when he joined the line and made his way to stand before the hiring agent.

Bronherrn lifted his arms and spun in a circle.

“Why do you wish to work in the mines?”

“I need a way to keep myself.”

“Have you ever mined before?”

“No, but I am a trained warrior who has cut down more men than you can count. I can guide a longsword, short sword, battle axe, and dagger with ease.”

“You’ll do. We start at dawn tomorrow. Meet outside the mines.”

Vermeesh stood waiting for Bronherrn when he walked off with a sense of accomplishment. “Are you as skilled as you say?”

Some of the other men gathered around. Vermeesh peered at them. “We’d like to learn from you. Many of us are lacking in the arts of war. We’ll make it worth your while.”

“You just indicated you don’t have much to keep yourself. And guessing by your present dress, you could use some help.”

Bronherrn stared down at his body. “Yes, I have had some trials as of late.”

“We’ll each spare an extra coin here to fill your belly, and find a roof to protect your head.”

“I accept.” Bronherrn untied his sword from his side.

Vermeesh stared at him. “You need not start yet. Come, let’s get better acquainted.”

Vermeesh and the others led him along. He asked, “How is it you seem to know this place so well?”

“Been traveling here to work this season for a while now.”

“You know the area?”

Vermeesh grunted in agreement and stepped into a dimly lit tavern. The strong smell of ale and sweat warmed Bronherrn. It reminded him of his father. He entered with his new companion and they found a table and sat ready to drink.

“Do the Zuthans ever come to these parts?” Bronherrn asked.

“No, they’re too busy trying to get at your lands.” Vermeesh’s laugh eased him and he took a swig of the mug the maid set before him.

He found comfort in his company and after much drinking and eating, stumbled along with Vermeesh. They sang old dirges that had lived for generations. Vermeesh let Bronherrn take up a corner of his room to rest for the night.

He slept well, but the first rooster’s crow came too soon. He sat up and stretched his limbs. “Vermeesh, it is time.”

Vermeesh grumbled awake and began to dress. “That all you got to wear?”

“Here.” Vermeesh rifled through his knapsack and threw a shirt and leathern pants at him.

“Of course you will.”

Bronherrn grew eager for the day’s end when he planned to offer ample enough fighting lessons to fulfill his debt, but he followed his friend to the mines. They met a crowd at the mouth of the entrance and received orders to head in.

Walking from the light of the open woodland, into the dark musty tunnel nearly crippled him. He had not expected to be plagued with memories of his captivity in the Zuthan dungeon, but entering the enclosed space made the fresh wounds of his torture ache. His breath quickened and he leaned against the stone wall.

“What is it Bron?” Vermeesh asked as another man lingered nearby.

“Nothing. It is nothing.”

“Then come on, boy.” The lingerer pushed him forward.

Vermeesh caught his arm. “You get used to it once you start working.”

Bronherrn moved on with the others. The deeper he went through the passageway, the more he had to focus himself. The few torches mounted on the tunnel walls gave off little light and he peered ahead anxiously.

When the opening widened into the interior mine, hundreds of lanterns lit the area where the sound of chisels clinked against the stone walls. A loud buzzing of masculine voices steadied him. Their chatter drowned out his past terrors. Bronherrn found that he could set up and focus on his task.

As he took up a pickaxe, he watched Vermeesh chisel away at the rock. It looked simple enough. He swung the axe and found himself falling into a steady rhythm. He pounded away and glimpsed the long face of the man who had pushed him forward. He glanced over at him more than once.

“Are you a Ultainian?” Bronherrn shouted above the clanking of metal on stone.

“No, but I’m friendly with your people.”

“How do you know I am one?” Bronherrn called out with suspicion.

“You’ve got the look all over you.” The stranger answered.

Bronherrn pondered this as he continued to swing.

“I once braved the Zuthan dungeons myself. I was none too happy to meet the depths of this mine when I first came here.”

Bronherrn cocked his head at him for a moment.

“Don’t be so confused. I’ve a gift for feeling people out.”

“So…” Vermeesh heaved and sucked in a breath, “you were kept prisoner?”

Bronherrn used all his strength to slam his pick against the stone digging out a large chunk. “Yes.”

“Not many have.” Bronherrn began to warm to the man who conversed with him and Vermeesh.

“How long were you held?” he asked.

“Oh, it was years ago. Before your time. I was held for some months, but when your people made peace with the Zuthans, they agreed to release all prisoners. Even a wandering man like me.”

Bronherrn thought of his father and his hand in this man’s past.

“They’re a fierce people Bron, but we withstood them.”

“What is your name?” He felt that he would never forget this man.

“They held me for a full turning of the seasons.” Bronherrn drove his tool against the wall with another vicious blow. “I recently escaped.”

“I can tell by looking at you.” Wilhelm grunted.

It came out like a compliment and Bronherrn continued to chisel away, happy to have good enough company.