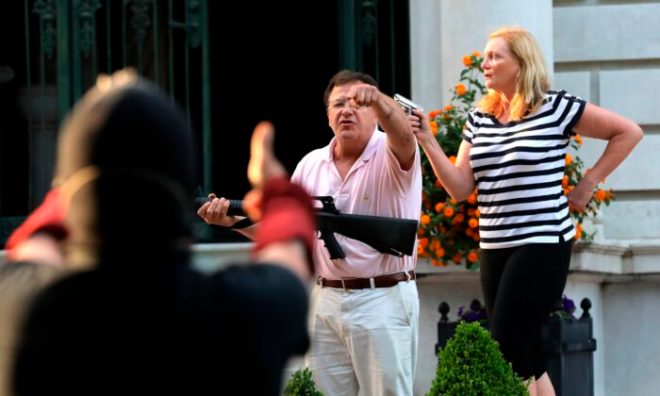 I didn’t know what to expect when I got this interview. Part of me was skeptical, that maybe the McCloskey’s staged what happened last year to enter politics, but now having met them in person at their law office I know they’ve been dealt quite a hand.

The mainstream media wants us to fight each other. See everything in political terms, black vs white, man vs woman, always someone against someone.

Politics has replaced sports and everyone’s picking teams, even the people who don’t back any politicians. The McCloskeys are painted as heros by some on the right and racists by others on the left. From my experiences, they are just 2 people who didn’t know what to do when their city was ravaged by “peaceful protesters” and the police were ordered to stand down. Those “peaceful protesters” shot and killed a black retired police chief named David Dorn and I think about how much his black life mattered so very often. He was a good man who served his community for decades, and when the media and the politicians stoked the flames of unrest, he was murdered by his own people for trying to help. THAT is a story I wish I could report on, but it would probably kill me.

When I walked up the front steps to the McCloskey’s law office, I stopped to look over the beautiful historic building. A man on a bike shouted something about “those gun toting bullies,” and drove off.

I had to ring the bell to be let in behind locked doors and was led into Mr. McCloskey’s lavish office. His desk was a thing of beauty that any writer would envy, but he sat relaxed and smiling. I told him I didn’t want to dwell on the infamous June 28th incident, because I was sure he’s sick of that. Instead I wanted to know about him and his wife, how they were handling everything, and mostly, why he decided to run for Senate.

Not only did I get those answers, but Mr. McCloskey was happy to show me pictures of the crushed gate that protesters had destroyed, and fliers from the fateful event which had circulated all over social media and had threatening slogans on them.

He detailed how these “peaceful protesters” had not just threatened them, their home, and their business, but also their dog, and that is a detail that I just stop and shake my head over. To me innocent animals are like young children. Anyone who threatens them is not on the “right side of history.”

I was told of how they had to board up their home and the law office for weeks after the media frenzy. They had to stop taking calls, emails, and the hate mail piled up from people who didn’t even give them a chance to offer the full scope of what happened. (They do receive quite a pile of supportive letters these days too.)

But when the police stop protecting law-abiding citizens, what are they supposed to do?

They had already watched people get killed and buildings burn. In the same situation a lot of us would feel the need to either fight or flee. I couldn’t fit all the details into this article, but the McCloskey’s had to replace their windows with bullet-proof glass because they had been shot at after the incident.

Even if you believe they were wrong, I subscribe to that old adage “Two wrongs don’t make a right.” It’s a hearty piece of wisdom that is lost in modern times and that crushes me.

I was so close to the Michael Brown riots when that all went down. I had friends on both sides. My friendly neighborhood police officer was there and so were old schoolmates who decided they needed to fight back. My life has been something of a struggle to reason with people and make them come together. I wanted to interview Mr. McCloskey because McCloskey is my maiden name, and because I felt there was more to the story.

I’ve reached out to McCloskey’s democratic opponent, Lucas Kunce, for an interview as well. He’s the military man who made a video mocking McCloskey, and like I do with most politicians, I agree with some of his ideas and disagree with some. If I get to interview him I plan to be as fair as I was with his opponent because that is what journalists are supposed to do.

It’s not up to me to tell YOU what to believe. It’s my job to offer up accurate information and allow YOU to decide what you believe.

Please read on with the reminder that people are always people. At the end of the day, no matter how much press or craziness someone has experienced, they are still a person: