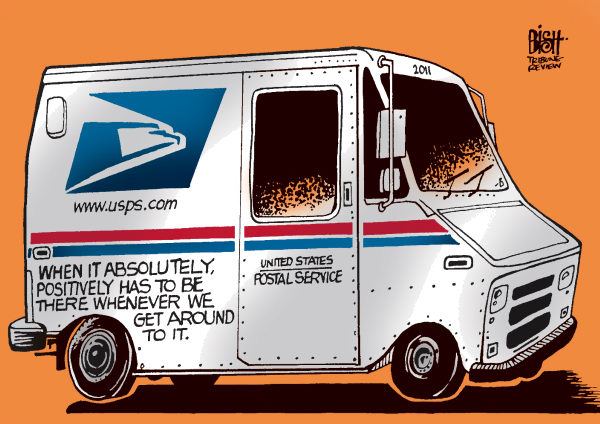 Damn. I am conflicted here. The United States Postal Service is a staple of American life. It has been around (not in its current form) since before the country was founded.

Letter Carriers delivered messages into battles, civil unrest, and the worst weather imaginable. But that is its past. Not its present. A lot has changed over time. What was once a respectable institution has become, over time, just another failed government project that bleeds money due to improper management and outdated policies.

I work for a small business. My husband runs his own small business. My father in-law has a small business. All heavily rely on secure shipping services. The USPS has continuously lost packages, destroyed packages, delivered them to the wrong city, state, and even country. They keep raising rates even though service has gotten worse. The “best part” of dealing with this federally mismanaged system is that there’s nothing a person can really do other than go elsewhere.

I understand that most letter carriers are good people. My mother worked as one for a time and one of my friends is currently a postman. That doesn’t excuse the fact that anytime I have had specifically terrible service from a postal worker who is rude, inconsiderate, or basically throws my fragile box into a bin before my eyes, nothing is done to reprimand them.

If I complain, I get even shittier service and my mail shows up destroyed (if at all) for about 3-6 months after reporting an incident. If I don’t complain I am either forced to just accept that this is “the way things are,” or take my business elsewhere.

All over social media people are screaming about #savethepostoffice, but maybe the post office should save itself. For starters, they need to step into this century. Since the email boom began I have wondered why the USPS hasn’t designed their own brand of email. Google and yahoo make a killing off of ads alone.

The flat-rate boxes were a great deal when first introduced, but the rates have risen so high it’s not economical unless you are mailing bricks. Charging more for less when people are struggling is a perfect way to go out of business. Instead, it may be smarter to offer more options. Like discounts for same-state-shipping or incentivized rewards plans for businesses and individuals who regularly utilize the USPS.

Hell, allow people coming for more involved services like extensive drop offs or passport applications to make appointments online so they can get in and out faster. That would also minimize risks during pandemics because it would be easier to control foot-traffic.

There are plenty of things the United States Post office could do to modernize and streamline their services to better suit the needs of their customers, cut costs, and drive revenue up. But instead it’s looking to bailouts and tax increases as a solution. Something that just puts more burdens on people who are already feeling the pinch.

It drives business away.

Thank the Gods for freedom of choice. There are a lot of mixed feelings about capitalism right now, but without it I would have to just bend over and take whatever is given to me instead of going elsewhere. Right now I prefer the alternatives.

UPS is far more reliable. I’ve never had an issue with their drivers and everything I ship through them gets where it needs to go in proper condition quicker than it would through the post office. The 1 time something went missing they remedied the situation right away.

Call me crazy, or a “traitor,” but I prefer to give my money to businesses that properly run themselves. I have no interest in protecting another failing government run system just because it’s been around “forever,” or due to public pressure. Public pressure also wants me to live off of fast food and further rot my mind and body with Netflix garbage. #NoThanks

The post office is failing because the post office has failed us. If it wants to regain our confidence it has to do the work, not us.