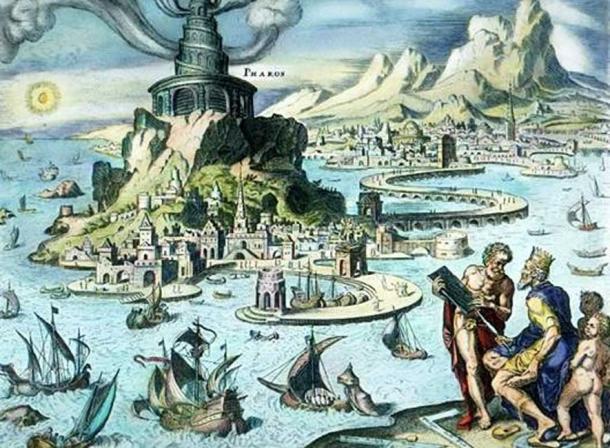 Bronherrn met Prillani and his children at the gates, but did not join in the holy ones ceremonial greeting. He fell upon his wife with such grief that she handed the baby to the priestesses who took the baby and Brackliem off to play.

“Did he suffer?” She stood stiff allowing Bronherrn to drape himself over her.

“You cannot imagine the change in him. I had to end it.” He gripped her tight.

“How is Aethelwyn?” she asked.

He pulled back and stared into his wife’s concerned eyes. “She suffers.” He glanced around to see if she was near. “Though you may not tell from her appearance.”

As if she knew they were speaking about her, Aethelwyn wandered toward them. The priests and priestesses surrounding them stepped aside leaving her a clear path. Bronherrn swallowed hard. He had found it difficult to look her in the eye since the death of Hefeydd. A   cloud dimmed her divine light. Even the amethyst of her eyes became a pale lilac.

Prillani stepped forward and pulled Aethelwyn into an embrace. “I am terribly grieved for you.”

Bronherrn held his breath as Aethelwyn’s voice caught in her throat.

“You need not bear it all yourself,” the eldest of the holy ones broke in. “Come, I have something to show you all.”

Bronherrn looked from the white curls of the priest’s hair down the tan of his hide robe. He pursed his lips and followed as they were led to the central area enclosed under a wood frame archway with vines of flowers spanning the great length. Beneath the new construct sat the flames that had engulfed Hefeydd’s body and continued to burn around the oil soaked altar. Before them, a circle of priestess sat with Brackliem and little Phara.

Bronherrn went hot and bared his teeth. “They should not be here.”

Aethelwyn reached for his hand. “They are being read their fates. The fire links them.”

Bronherrn bit his lip, ready to argue if anything went awry. Prillani rubbed his shoulders and kissed his cheek. Aethelwyn went to join the other holy ones. She stepped with a soft grace. Her eyes lingered on the ashes of her husband’s body.

Prillani shifted closer to Bronherrn and leaned her head against his arm. “What do you make of it?”

He fought against the urge to shout, pressed all of his anger deep within and sighed. “I want nothing to do with these fates and tellings of things to come. It has brought me nothing but loss.”

“You cannot say that.” Prillani’s deep brown eyes widened. “It brought you to me. Gave us our children.”

The wait tortured Bronherrn. He hated to hear of things to come when none of it gave any insight as to how it would be brought about. Clenching his fists, he dug his nails into the skin of his palms.

Aethelwyn turned to face him and the deep amethyst of her eyes shined brighter than before. Her skin glowed so brilliant it nearly blinded him for a moment.

“What is it?” Prillani smiled leaning forward.

“Phara is what Hefeydd said.”

Bronherrn grasped the hilt of his sword, unsure of what to do. But Aethelwyn moved fast, laying her hand over his before he could act. “He knew.” She lowered her voice and raised her eyebrows, “Hefeydd was prepared. He knew what he would become. He tried to warn me, all of us,” she raised her voice and gestured around to her kind.

Prillani went to the priestess holding her daughter and grasped her child in a protective cradle. “Aethelwyn.” Her eyes twitched with a pleading fear.

Bronherrn did not feel any danger escalating. He surveyed the priests and priestesses standing before them and found no threat. “They know all.”

“Yes.” Aethelwyn’s midnight hair blew about her as she carefully patted Phara.

Brackliem ran over to Bronherrn. “What do they know of?”

Bronherrn swung his son up in his arms and hugged the boy to him. “Nothing but fairytales.”

Aethelwyn smiled on them. “Hefeydd willingly accepted the path, knowing that his mind would be destroyed by the severance with his Godly self. He did it for her.” She looked to Phara.

Prillani stared down at her daughter. She shook her head. “No. She does not need this. She should be able to grow up and live like anyone else.”

Bronherrn balanced Brackliem in one arm and hugged Prillani with the other. “I know your fears. We will face them together. I have had to live with them since I was a boy.”

“Why can you not see how special this it?” The eldest priest whispered from behind them.

Bronherrn turned to gaze on his wisdom. Barely a wrinkle marked the old one, but his eyes may as well have held the history of the world. “There is so much more to life than just what one sees.”

Aethelwyn shifted and stood beside the priest. “Bronherrn, you have always struggled with uncertainty.”

He dared to search the depths of her eyes for the first time since Hefeydd died. Something had changed, there was a new hue. A darker center like the inner workings of a crystal. For a moment, he thought he glimpsed a hint of Hefeydd in that gaze.

“I could not tell you all then, as I cannot now, but I am able to offer you this insight. Your daughter is to become the ruler who will unite all the lands. Not just the Ultain Mountains and the Zuthan valleys, but the areas beyond that, including this realm.”

Bronherrn’s mind fogged over. He could not think of anything, anyone, except his daughter. He drew in a long breath. “How is that possible?”

“She is the lifeblood that will determine a new era.”

“He is her protector.” She patted his head and he giggled.

“I am. She will always be safe with me.”

Aethelwyn nodded at him. “Not just in the sense of a sibling fulfilling an instinctual obligation. You have a course of greatness that will not be matched. You are the pinnacle of two bloodlines that have mingled for the first time. Your strength will be controlled by an unparalleled intellect.”

Everything Aethelwyn said brought the course of Bronherrn’s life into focus. He examined his memories, and found the paths linking every event to this moment. All his bitterness melted away and he thanked her. “We have much to look forward to.”

Bronherrn marched to the field with his son. Young Brackliem finally earned the right to his first fighting lesson. He worked to hold the heavy steel weighing him down. He struggled to  keep up with his father.

They passed through the fresh spring grasses, and Bronherrn shadow covered his son. “It is very gracious of you to praise your younger sister as our future ruler. Many would not be so kind, I fear.”

“I aim…to be an elder warrior…like you father.” Brackliem panted as he struggled to carry his weapons.

“Yes, you were never made for politics.” Bronherrn stopped him as they reached the center of the field.

“And Phara has a lot of work ahead of her.” Brackliem snickered.

“Work?” Bronherrn fought off a laugh. “Boy, you shall have your share.”

Brackliem eyed his father. The man lunged into a deep stance and held his sword before him without moving. “This is your first true test. You must learn to balance, hold steady, and guard your position for as long as possible.”

“But when do I get to swing my sword?” Brackliem whined.

“Bronherrn spaned his bottom with his own sword. “When you learn some manners. A man cannot live through battle if he cannot even stand in a field. Now, do as I do.”

Bracklein lunged, mimicking him. He heldthe position with a shaky underdeveloped frame.

“Your silence is reassuring.” Bronherrn praised him. “How about I tell you the story of my first battle to ease your mind?”

Bronherrn indulged the boy, making sure to hold his position as wekk.

Brackleim didn’t budge the same. His big eyes widened as time went on. Bronherrn made sure to add as much detail to his story as possible, testing his son’s strength as much as his focus.

At the end of his tale, he smiled. “I am pleased to see how strong you are. I myself passed out during my first…” Before he could finish his sentence, Brackliem fell unconscious.

Bronherrn carefully moved to stand over his son. “Just like me at that age.”

He picked the boy up and carried him home.