I learned to crochet when I was 9. My mom taught me and I picked it up easy. It came in handy when I became a mother.

I tried knitting when my second daughter had colic. She wanted me to hold her all night so I would stay up rocking her in the rocking chair. I knit my mom a scarf during this time because it took forever and I needed something to steady me all night, but now that my daughter’s been sleeping through the night for years and I have 2 little boys as well, crochet projects are best.

They’re easy for me to finish fast. Hats, blankets, scarfs, and even sweaters don’t take me too long. But a tree skirt?

This year I decided to finally test out making sweaters for all of my kids. There were a few hiccups along the way, but nothing like this tree skirt insanity. Tree skirts start small, and each row gets bigger and bigger, and it just keeps fanning out further and further…

It’s like that nightmare where you’re running down a hallway and the hall just keeps growing. The end seems close, but it’s very very far. I’ve been sitting up, forcing my hands to go the extra mile. By 2am my eyes are pretty done.

I agree with the adage: Nothing good happens after 2am.

Well, not unless you work the night shift or something.

But either way, I’ve been wanting to do this for years, just never got around to it. And now I know why. My mother crocheted 1 single tree skirt in her life. And again–now I know why.

I tried 2 or 3 patterns that produces nothing but insanity before I found one that I thought worked. The finished skirt isn’t bad but the inside that wraps around the tree is the right size and somehow the rest of it is just wayyyyyyyy too big. It weighs more than my toddler and is such a monster that if I don’t want a strange new ribbon-ish motif I had to fold it in half and still it’s just too crunched. There are too many panels. The pattern makes about 12, I think 9 or 6 would have worked better. 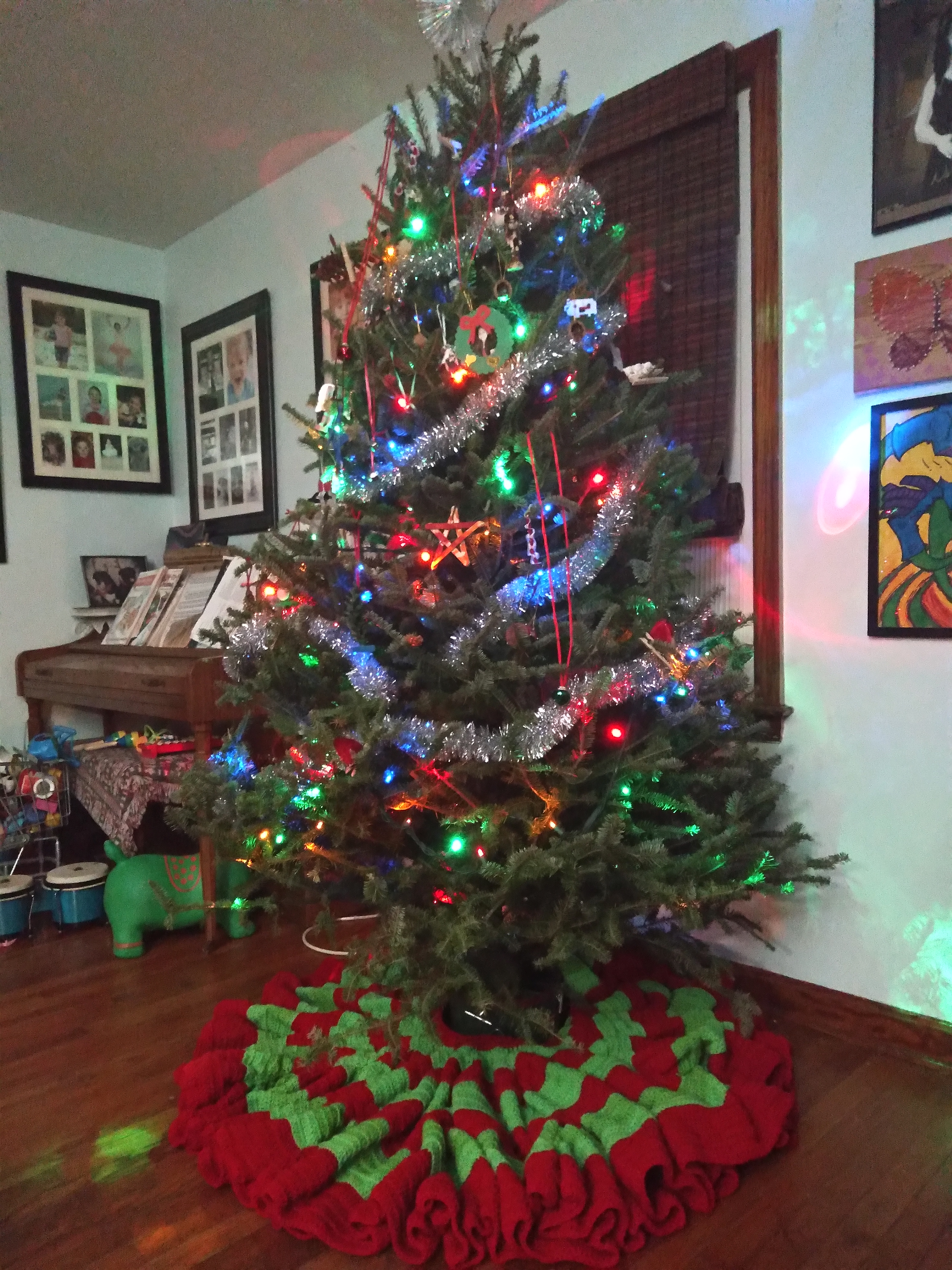 Maybe I messed up but I’m pretty good at following patterns. So I don’t know. Something didn’t work, for sure.

It sucks to work and work and then not produce the results you wanted. I was a bit miffed at first, but after my 9 year old laid on it under the tree I felt better. It’s not bad, but man did it take forever to finish. Countless hours and just balls and balls of yarn.

I’m wish I could say I’ll never have to do this again, but there has to be a better pattern out there (that is READABLE). Someday. (Def not this year haha)

Here’s the pattern I used if you want to try it or avoid it like the plague: https://www.mooglyblog.com/happy-holidays-tree-skirt/

6 thoughts on “I Crocheted Our Tree skirt”