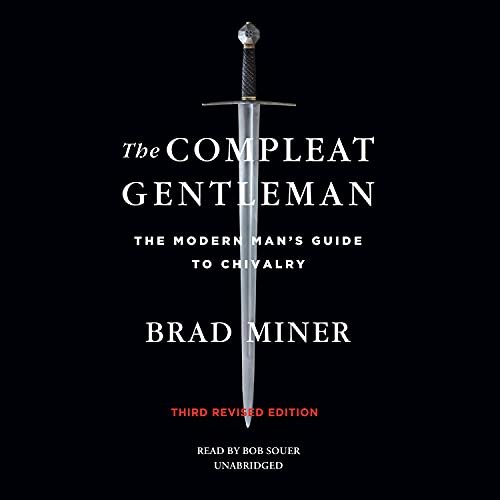 Brad Miner’s The Compleat Gentleman: The Modern Man’s Guide to Chivalry was not written for me, specifically. I am not a man, but in raising 2 sons, I found the opportunity to read Regnery Publishing’s edition irresistible.

My boys are young, much younger than their sisters. The toddler is just learning about the joys of boyhood, and the baby is… well… a baby. Still, my concerns for these little men grow every day because masculinity is under attack and prejudices against them ─ especially white men ─ are being passed around by the media and politicians like a peace pipe.

This book is the 3rd edition, but comes with newly revised passages that address the current hypocrisies of movements seeking to strip individuals of their accomplishments in the name of “justice” and “equality.” The author details the long history of chivalry in western culture. This history is backed by numerous sources, references, and works of literature that work to not only remind American’s of the better parts of our society, but also offer a valuable reference for arguing against those who wish to destroy our culture from the inside out.

Miner points out the fallacies of destructive organizations like BLM and Antifa, how they do not practice what they preach, and offer little honor when terrorizing their own people. He examines the medieval knight and Hollywood representations which tend to write heroes with cynicism, or unrealistic infallibility. “Hollywood, especially, has tended to portray the warrior as a dysfunctional individual.”

He argues that a chivalrous compleat gentleman does not have to be a fighter. Monks are a lesser spotlighted gentleman who lead lives of harmony and balance. But in regards to wholeness, it is noted that a man needs to know how to fight if the situation requires it, “I often hear it said that violence is not inevitable, and, therefore, that a warrior attitude and training are unnecessary. I once thought so too, but I grew up, and now the pacifists and I are simply moral strangers.”

Much of the text presents ideals which have been honored throughout most of western history and are under fire today. Though I recommend “The Compleat Gentleman” as a guide for any male looking to expand his knowledge of his place in the world, there were a few passages where the author and I did not agree.

He denounced left-wing terrorism, which has cost billions of dollars of damage and killed dozens of people. Then he compared the January 6th events on Capitol Hill to these actions, despite little to no damage being done, and no deaths directly linked to the protesters. A police office shooting a protester is not an insurgent action, nor are the few health-related deaths which would have happened anywhere. Decrying unnecessary violence is a part of being a compleat gentleman, and I imagine the author was comparing the situations to balance his perspective, something I respect and appreciated as I read on.

A great portion in the content of the second half of the book goes over death and our modern fear of it. How a man faces death is a great aspect of being an honorable. As Miner states, “Fearing death is not necessarily cowardly. But death will come, and the question is: How will a man face death? The warrior’s way is the way of the dojo: he spars with death, brother against brother. The monk’s way is the way of the cloister, where death walks the corridors and sits at table and works in the gardens alongside his living brothers. When death takes a monk, it is as if the dead brother has entered a room in the monastery from which the living are prohibited, but he remains in the community awaiting his brothers, who will join him one by one.”

From death to love, the material produces a mixture of understanding and hope for future generations. It explores how chivalry aided, if not encouraged, the evolution of courtly love and what it means to respect a woman and her desires.

Once again, I found myself disagreeing with the author, who adamantly declared that gentlemen give the woman they love whatever they want. He rectified this idea with the expectation that a true lady should know what she wants, but even so, many women (myself included) don’t always want what they think they want.

This is one of the most confusing difference between the sexes, and there was a call for someone to write about The Compleat Lady, something that could offer a bit more information on why the female brain works differently and women shouldn’t always be gifted whatever they want, but in continuing the book, there were plenty of comments on equality movements which seem to have gone from wanting equal rights to wishing to defy our biology. This lead to an overview of issues within the education system, which, itself was built from the Christian values that propelled western culture out of the dark ages.

In closing, Miner acknowledged his martial arts education as a guide for writing this book, and presented himself as a true scholar. If not chivalrous himself, his pursuit to be so is akin to the quest for upholding knightly values, which define the complete gentleman as: a descendant of medieval knights and Victorian gentleman, a conservative liberal, an honorable man with self-control who knows when and why he must fight, and when and how to love.

All of the characteristics described are those which I wish for my sons. As stated in this piece of nonfiction, “A compleat gentleman is a man who tries to do what is right and honorable in any given situation. He seeks harmony with the laws of God, or nature, and of man.”